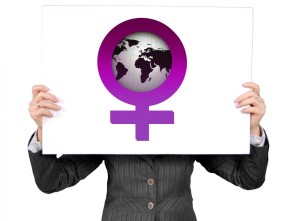 Policy instruments intended to inform better decision-making are often gender-blind in their perspectives. In other words, policy decisions can be structured to address broad issues – increased income for individuals, peace in a conflict zone, etc. – but their analyses often overlook the fact that different outcomes are experienced by different genders.

As opposed to biological sex, gender refers to socially constructed characteristics of women and men – such as norms, roles, and relationships. These norms and roles change across culture and time. For instance, in their book Identity Economics, Professor Akerlof and Kranton argue that a change in gender norms led to increased cigarette smoking among women after the Women’s Movement in the 1970s. Women changed their behavior as they increasingly identified as belonging to a certain group, while challenging established norms.

The concept of gender is varies from person to person. For instance, in her book Women and Wars, Carol Cohn argues that gender can be understood from the context of a specific experience. She broadly defines gender as a way of categorizing, ordering, and symbolizing power. She also argues that gender functions through other power structures, such as class, caste, race, ethnicity, and sexuality.

Gender is often internalized by individuals as they express their identities. For policy makers, using gender as a conceptual lens can have multifold utilities. It can be especially useful for three purposes.

Firstly, using gender as a conceptual lens can be useful for understanding certain policy issues. For instance, pay parity can be better understood if we account for norms associated with masculinities and femininities. Attributes perceived to be related to masculinities like risk-taking and competitiveness can deeper our insights into causes of pay inequality. Additionally, gender can also help us comprehend the diversity in experiences of men and women. For instance, in conflict zones, men and women perform different identities as they belong to ranks of fighters, caregivers, and security chiefs, while conforming to masculine and feminine norms

Moreover, gender norms shape behaviors and responsibilities. For instance, many policy makers have pointed out that in developing countries, ‘energy is women’s business’ because women are responsible for providing energy and food in the household. Absence of gendered analysis in these countries can, therefore, fail to emphasize the specific experiences of women, such as health problems due to low-quality fuels.

This leads to the second reason of using a gender conceptual lens; it can help us offer better policy recommendations. For instance, in conflict zones, men and women can have vastly different experiences, as women are more prone to sexual assaults in zones where peace has just ended. Policies built upon such gendered insights will be more effective in stabilizing post-conflict zones. Moreover, when channeled through different groups of individuals, policy instruments can differ significantly. For instance, reserving leadership positions for women in developing countries has led to increased focus on women’s issues in those countries. These results highlight the importance of structuring policies in unique ways to garner better outcomes.

Finally, using a gender conceptual lens allows us to acknowledge categories of gender that are often ignored in policy decisions. It helps consider the impacts of policies on individuals who do not identify themselves into the predominant gender categories, but experience policy impacts equally or even to a greater degree. For instance, in countries like India and Australia, the ‘third gender’ was not recognized as a legal category until 2014. Without using a gendered lens, experiences of third gender people, even on such basic issues – as legal recognition – may be disregarded.

A call to action

Therefore, it is imperative that policy instruments are gender sensitive so that they can disentangle intended effects and impacts of policies, while acknowledging the different lived experiences across genders. Organizations like the World Bank and Asian Development Bank offer resources to guide gendered analysis. In their report, Tool Kit on Gender Equality Results and Indicators, the World Bank provides comprehensive, sector-specific advice, tools, and framework to implement, monitor, review, and evaluate policies. The report outlines minimum standards for gendered policy analysis like using disaggregated data. Following tools like these is a first step to using this critical lens in policy creation and evaluation.