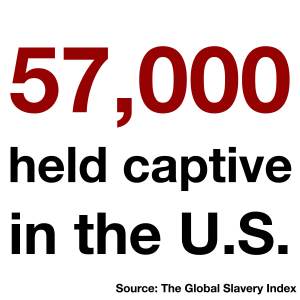 The Global Slavery Index (GSI) estimates that 45.8 million people are currently enslaved  globally, with North Korea, Uzbekistan, Cambodia, and India among the greatest offenders. While many developed nations rank better on the index, human trafficking still occurs in these countries. The GSI reports that 57,000 individuals in the U.S. are being held captive. Although some nations are becoming more aware of human trafficking crimes and government involvement has improved, false information can draw attention away from protecting the most vulnerable every day.

Human trafficking will likely see increased media attention as the beginning of the year approaches because large sporting events like the Super Bowl and the Olympics have been perceived  as hot beds for the sex trade. Former Texas Attorney General and current Governor Greg Abbott exacerbated this claim in 2011 when he announced the Super Bowl as the “single largest human trafficking incident in the United States,” just before Dallas hosted the game. Over time, research has found that the connection between travel-heavy sporting events and a spike in trafficking is not as prevalent as previously thought. Abbott expected that nearly 100,000 prostitutes would be brought into the city during the event. Dallas increased police presence to combat potential threats, but only  59 arrests during the weeks surrounding the game were related to human trafficking and prostitution. While law enforcement officers should continue to work to stop all human trafficking cases, studies show that trafficking activity during larger events is similar to any other day. Protecting potential victims of trafficking is a constant battle not dependent upon increased travelers to a specific city.

Environments outside of sporting events in the U.S. are more prone to trafficking. The GSI notes that immigrants, refugees, and runaway homeless youth are among the populations most  susceptible to being forced into slavery. Individuals who experience language barriers or fear deportation are more likely to be oppressed because they  lack the ability to generate income elsewhere. A study from the Urban Institute indicates that, in New York City, nearly 25 percent of homeless youth have traded sex for necessities such as shelter. Additionally, nearly all of the youth surveyed in a 2016 study by Covenant House International replied that they had been offered work opportunities that were either fraudulent or involved some form of sex trafficking.

The U.S. has taken strides to overcome modern day slavery, but there is more work to be done. The Trafficking Victims Protection Act (TVPA) of 2000 was the first of many iterations of legislation designed to guard against the spread of the trafficking industry. The act established trafficking as a crime and requires victims be paid restitution, making it the cornerstone of victim advocacy in the U.S. TVPA also established the Office to Monitor and Combat Trafficking in Persons which publishes an annual report on human trafficking to outline what best practices countries use to help end the crime. According to the Polaris Project, the organization that operates the National Human Trafficking Hotline, Congress is currently working on the reauthorization of the TVPA to renew programs and spending that fight against slavery.

Lastly, policymakers are also discussing whether to offer amnesty in cases where victims of exploitation commit crimes while in bondage. The Cyntoia Brown case, which recently received heightened media attention, involves an instance where a young girl who was forced into sexual slavery killed her oppressor in order to escape. While most proposed legislation seeks to pardon victims for crimes they were forced to commit rather than those committed in self-defense, the story has many policymakers debating erasing criminal records of trafficking survivors as a way to ensure victims’ rights.

Although the media and policymakers tend to focus on preventing high profile instances of sex trafficking such as sporting events, they must also work everyday to protect vulnerable populations from exploitation and ease the reentry process for victims.