As the global refugee crisis worsens, European governments have quickly embarked on a hysteria-driven campaign of border closing, making it harder for refugees to move around the passport-free Schengen zone. These fears, which are fueled by the misplaced anxiety that refugees  are a danger to public safety, will only unnecessarily drain Europe’s economy while weakening the Schengen area’s commitment to open borders.

After the November terrorist attacks in Paris, The French government imposed border controls, along with a national state of emergency, for an indefinite period of time. Denmark, Sweden, Germany, Norway, and Austria soon followed suit. While the Schengen Agreement allows for temporary border controls to be imposed for reasons of “public policy or national security” this current round of restrictions is unprecedented. The European Commission (the executive body of the European Union) itself is considering a plan to suspend the agreement after the six month limit expires in May. This is not just bad public policy, it threatens the very values upon which the European Union (EU) was founded.

Schengen is Good for Europe

In 1985, ten member states of the European Economic Community, the EU’s predecessor, signed the Schengen Agreement which pledged to abolish internal border controls and establish a common visa policy. The 1999 Amsterdam Treaty incorporated Schengen into EU law, making open borders a requirement for all EU members except Ireland and the United Kingdom. The Schengen Agreement was essential for creating the European Single Market and the free flow of goods, services, and labor that came with it. 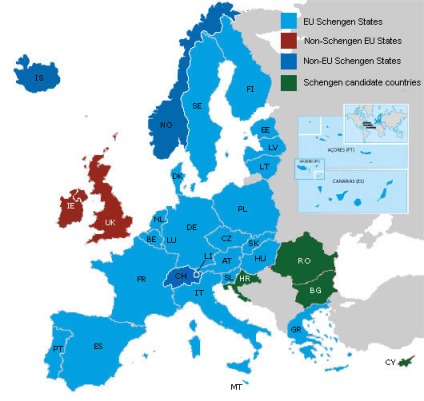 Closing internal borders now would not only be ineffective against terrorism, it would cause significant damage to the EU economy. An estimated 1.3 billion internal border crossings are made each year along with $3.7 trillion worth of goods. Re-imposing controls is expected to cost member state economies significantly. One report found that France alone is set to lose up to €10 billion this year from a slowdown in cross-border trade. Other estimates show that border controls could cost the European economy €3 billion annually if an extra hour is added to each crossing due to delays. In metropolitan areas such as Malmo-Copenhagen or Greater Geneva, whose economies depend on workers commuting from different countries, the impact could be much worse.

Asylum Seekers Are Not the Problem

Despite all the rhetoric from politicians, particularly those on Europe’s far right, fears that the recent influx of refugees will increase the risk of terrorism are misplaced. According to Europol, the vast majority of terrorist attacks in Europe were carried out by European citizens, and only a small portion of those were religiously motivated. Even the November attacks in Paris, where many were quick to blame Syrian refugees, were the work of French and Belgian nationals.

The EU’s 2015 counterterrorism strategy identifies radicalization among European citizens as one of the primary causes of terrorism. Potential threats from refugees and asylum seekers are hardly mentioned, let alone identified as a threat. The EU-wide strategy places far more attention on tracking the movements and finances of foreign fighters with known links to terrorist groups, in addition to encouraging more cooperation among national security agencies. The European Arrest Warrant, which requires all member states to arrest and transfer a criminal suspects to the issuing state, is now being used to prosecute terrorist suspects more robustly. Furthermore, judges and law enforcement officers continue to be encouraged to use the European Criminal Records Information System (ECRIS), which allows all participating countries to track and exchange information on potential terrorists criminal backgrounds.

Putting up temporary barriers between friendly member states isn’t going to prevent future attacks, and will only serve to make life harder for law abiding citizens crossing the border for business, leisure, and family visits. Temporary border checks also won’t address crime, which is another issue proponents of closed borders often bring up. Crime among refugees shouldn’t be a cause for concern anyway. A recent investigation by Germany’s interior ministry found that crimes committed by refugees stood at the same level as those committed by native Germans.

Instead of closing borders, EU member states should pursue more cooperation in dealing with the refugee crisis. A good first step would be to implement the refugee redistribution plan member states agreed to last September. Of the 120,000 refugees EU countries pledged to resettle, only a few hundred have actually been relocated. More international aid to refugees stranded in Lebanon, Jordan, and Turkey would also help – the $11 billion raised through a donor conference in London last month was a good start. Ultimately, a permanent ceasefire in Syria is needed stabilize the country and prevent more people from becoming refugees in the first place. Most importantly however, European leaders should realize that none of these problems can be worked out if the EU doesn’t stay together. Defying the Schengen Agreement with walls and checkpoints only threatens that unity and makes working together even more difficult.

← What Drives the Russia-China Relationship
Turning a Blind Eye: The US Failure to Recognize the Armenian Genocide After 101 Years →